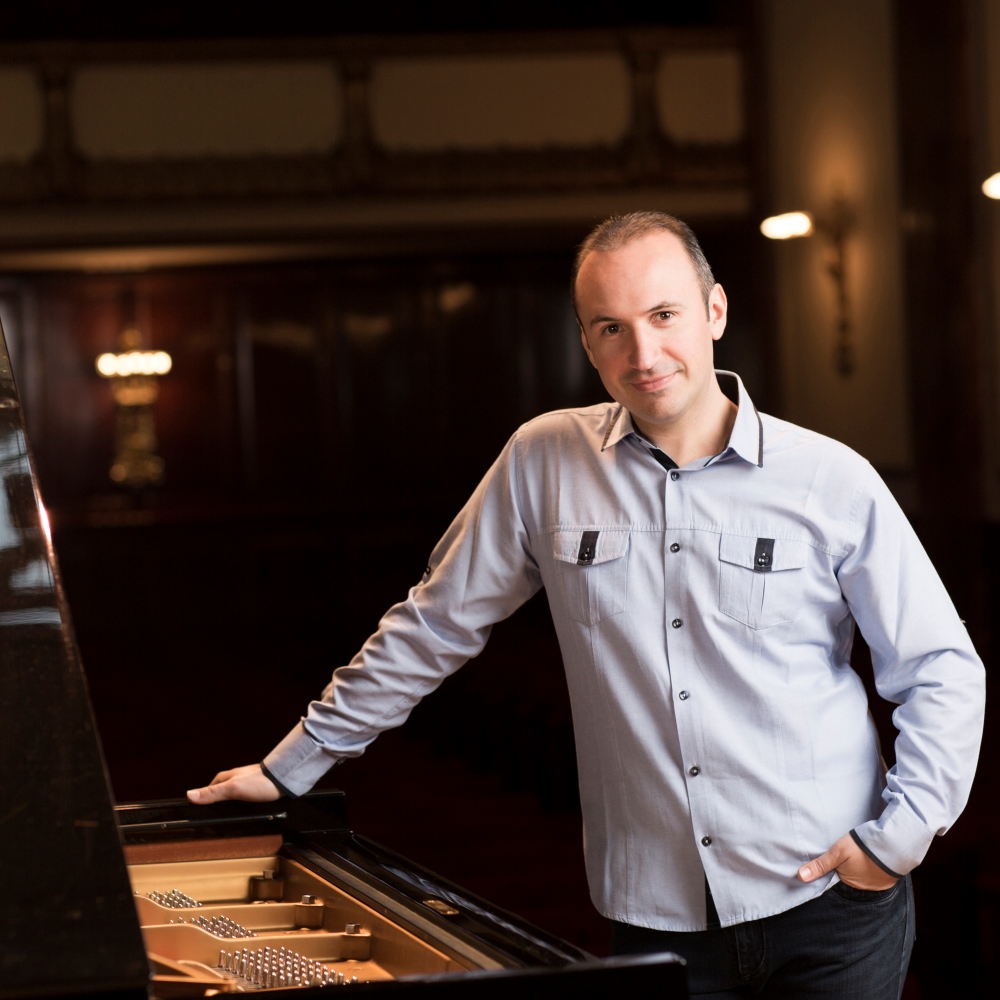 Macedonian pianist Simon Trpčeski (b. 1979) is one of the few artists from the former Yugoslavia to have established himself as one of the leading musicians on the international scene. His dazzling international career began almost twenty years ago with a series of successful concerts as part of BBC Radio’s New Generation Artists programme, concerts which catapulted him onto the global stage.

He received the Royal Philharmonic Society Award for Young Artists in 2003. Since then he has appeared with over a hundred orchestras, including the Royal Concertgebouw Orchestra, the Russian National Orchestra, the WDR Sinfonieorchester Köln, the Dresden Philharmonic, Orchestre National de France, the London Symphony Orchestra, the Philharmonia Orchestra, the City  of Birmingham Symphony Orchestra, with the leading USA orchestras (the Cleveland and Philadelphia Orchestras, the Los Angeles and New York Philharmonics, the Chicago, San Francisco, St. Louis, Seattle, and the Baltimore symphonies), the  China  Philharmonic Orchestra and the Sydney Symphony Orchestra. A much sought-after soloist, the long list of prominent conductors Simon Trpčeski has worked with includes Lorin Maazel, Vladimir Ashkenazy, Marin Alsop, Gustavo Dudamel, Cristian Măcelaru, Charles Dutoit, Jakob Hrůša, Vladimir Jurowski, Susanna Mälkki, Andris Nelsons, Antonio Pappano, Vasily  Petrenko, Robert Spano, Michael Tilson Thomas, Gabriel Bebeşelea and David Zinman. He has a particularly long-standing relationship with the Royal Liverpool Philharmonic Orchestra, further strengthened during the tenure of Vassily  Petrenko. Together, they have recorded the monuments of the Russian piano and orchestra repertoire.

He regularly performs solo recitals in cultural capitals such as New York, Paris, Munich, Prague, Sao Paulo, Sydney, Beijing, Tokyo as well as in London, where he recently served as artist-in-residence at Wigmore Hall. He has appeared at a number of  prestigious festivals including the Verbier, Bergen, Baltic Sea and BBC Proms festivals.

A devoted chamber musician, he performs regularly with cellist Daniel Müller-Schott, and his latest chamber music collaboration is with the worldrenowned violinist Maxim Vengerov. He dedicates himself to concerts with the Makedonissimo project, which he founded together with the composer Pande Shahov. The ensemble presents the musical and cultural tradition of his native North Macedonia. Simon Trpčeski has also released numerous recordings. His debut album, released in 2002 by EMI, received the “Editor's Choice” and “Debut Album” prizes at the Gramophone Awards that same year. His Rachmaninov concerto cycle in 2010 and 2011 won the Gramophone “Editor’s Choice” award and received a Diapason d’Or. In 2017 he again received the Diapason d'Or for his recordings of Prokofiev’s piano concertos released on the Onyx label.

With the special support of Kultur-Op, North Macedonia’s leading cultural and arts organization, Trpčeski works regularly with young Macedonian musicians, nurturing the next generation of artists in his homeland.